Theodora Pottle, one of Western Illinois University’s most well-known historical women, was born on May 25, 1889 in Chicago, Illinois. She was the only child of William and Eunice Goodrich Pottle, parents who appreciated and worked to preserve the arts (Hallwas 79). Her mother directed the Eunice Goodrich Theatrical Company, in her name, and her father was the owner of the roller chair concession at the Columbian Exposition of 1893, also called the Chicago World Fair (Theodora Pottle Memorial Collection of American Art).

Theodora came from a family of inventors; both of her grandfathers having invented attachments to the new Singer Sewing Machine and the rattan chair. Perhaps this, or Theodora’s numerous stage performances as a girl, influenced her decision to lead a creative adult life. Her parents took her on their travels throughout the United States; a hobby Theodora would eventually inherit. While visiting different parts of the country, Theodora took part in numerous plays and performed onstage as Girl Wonder (Peoria Journal Star). 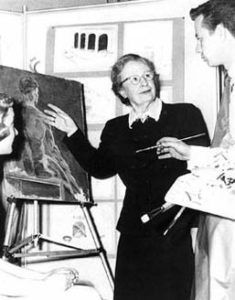 Theodora received both her B.A. and M.A. from the University of Chicago; however, she also studied at the Art Institute of Chicago, Columbia University, the University of Colorado, the University of Arizona, and even the Ransom Studios in Paris, France. By the time she came to Western Illinois University in 1928, then called the State Teachers College, as an instructor and head of the art department, she had already taught music and art in Duluth, Tucson, Ludington, Traverse City in Michigan, and the University High School in Chicago. She had also traveled to 58 states, Canada, Mexico, and had made frequent trips to Europe (Theodora Pottle Memorial Collection of American Art).

Theodora was the head of Western Illinois University’s art department from 1928 until 1958 when she retired. Her career was extremely important to her; in fact, she never married or had any children. During her career, she published a number of children’s art textbooks called My Own Picture Book Series. These were designed to be used in elementary schools to generate an enthusiasm for the arts in young children. She contributed numerous articles to various art and home economic magazines as well (Western Courier). Besides her love for teaching, Theodora had a wide range of interests and enthusiasm which carried over into community activities. She was a charter member of the Auxiliary to the McDonough County Hospital in which she helped to inaugurate the gift shop. She frequently provided designs for the Christmas cards sold in the shop; in fact, designing Christmas cards was a personal hobby of hers and she sent her creations to friends and fellow faculty members. She was also part of the Macomb Branch of the American Association of University Women and the Macomb Bridge Club. She maintained a lifelong involvement in theater and performed in a variety of roles in the Macomb Community Theater (Theodora Pottle Memorial Collection of American Art). During her 47 years in Macomb, she belonged to the Unitarian Universalist Fellowship and church. Her hobbies included playing cards, square dancing, attending movies and stage plays. Her passions were working with oil painting, listening to Gershwin and travelling (Western Courier).

She touched the lives of many students who crossed her path. One of them has spoken out about Theodora’s teaching; “Miss Pottle was an unusually imaginative and innovative teacher. Over the years, many people gained an awareness of the joy to be derived from the creation and contemplation of works of art as a result of her teachings” (Theodora Pottle Memorial Collection of American Art). She took her teaching seriously and frequently attended conferences for education and the arts. She attended the first ever National Art Education Association conference in New York City. This consisted of meetings, visits to art studios, a fashion show presentation and dances. The theme of the conference was the knowledge that one of the best ways of learning to understand one another is through the arts. When asked about the conference for a campus interview, Theodora said, “The entire affair resembled a three-ring circus and my only complaint is that there were just too many interesting activities going on at once, and it was therefore difficult to devote full attention to any particular one” (Western Courier).

When Theodora retired in 1958, she still continued her involvement with art. In 1969, she was given a solo exhibition in Macomb to show some of her paintings. When she was interviewed about retirement in regards to her career she said, “You have a lot of fun when you get old. You can say and do things you’d never get away with before. I didn’t really start enjoying things until I was mature” (A-12 Journal STAR).

In her will, she left $21,000 to the American Association of University Women with specific instructions that the money be used to commission artwork for the city of Macomb. The selections included many paintings and a giant tapestry which still hangs in the Macomb Public Library, the McDonough County Courthouse and the McDonough County District Hospital. The purpose of this was to “promote interests in the graphic arts, foster careers of practicing artists, and to provide placement of arts in community where they would be accessible to the public” (Theodora Pottle Memorial Collection of American Art). When she died on January 3, 1975 in the Americana Nursing Center, she was 85 years old and had lived a life filled with accomplishments. She was cremated and her ashes were scattered in Lake Michigan (Industry Press).