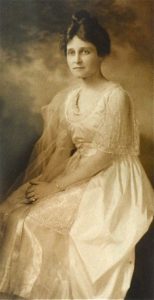 Mary Agnes Yerkes’ (August 9, 1886 – July 29, 1989) story is about a love affair. A love affair on many different levels. She was a woman of diminutive size but large in her spirit and independence. Even grander in her love of art and the nature she so passionately painted. She lived to an astonishing age of 103, and she was my Great Aunt Agnes.

I say she was diminutive in size for I remember her best as a young man visiting her. My 20-year old 6’-2” frame towered above her. By then she was already aged near 90. She boasting perfect eyesight, still walked without a cane and with an energy that could outlast the unsuspecting. I knew her earlier as a child but then my sense of art and appreciation was not as developed, nor was my sense of the depth of her talent. I did love at that young age though, her gardens of flowers and citrus. A source of pride for her. I enjoyed the items from nature that she had collected. Pine cones the size of their cat, Indian baskets, twisted piece of wood, polished agates and petrified wood. A home adorned by the art of God’s hands and by those of her own paintings, representing an appreciation thereof. She wove fabric on a loom for her own cloths. She carved furniture, handmade rugs and slept in a tent as she traveled the West and Canada to paint. An unpretentious lifestyle, a modest home in San Mateo, CA, and an unassuming woman should you see her passing by.

Our misfortune was that she lived at a physical distance from us. We being east coast and she being west. She was never far in spirit though. Her paintings were on our walls and her name always at the center of family discussions. Famous for her encompassing talent, her enduring health and longevity of years. Infamous for a relationship she had with a man very much her junior, this after her husband’s death. A man now seen as being devotedly in love with her and undoubtedly why she will remain the champion of family birthdays.

Born in the Chicago area, Mary Agnes was the second daughter and third in line of four siblings. My Grandfather, Charles Greenlees Yerkes, the youngest, received much of the attention from his doting older sister throughout his life. When my Grandfather passed, my Father received it in turn. She was nurtured by a mother who was artistic herself. It became evident early that Mary Agnes had a much greater gift, enough so that she pursued art academically. She attended Rockford College, then at the Chicago Art Institute and Academy of Fine Arts, (now School of the Art Institute of Chicago). She often recalled a talented young man she went to school with at the Chicago Art Institute. Walt Disney was his name. “A skinny boy who always carried a pencil box around with him”, she would say. Academic accomplishment led to a professional desire and a brief career. The Oak Park home which she knew as a young adult, was commissioned by her mother from architect John S. Van Bergen, an early draftsmen for Frank Lloyd Wright. In its original design was included a studio specifically for Mary Agnes. This home is now a part of the Oak Park Historic Preservation Trust in Oak Park, IL.

It is unclear how long Mary Agnes’ professional career lasted. There is record of her exhibiting in Chicago and specifically at the Art Institute of Chicago. She also taught art after graduating from the Academy of Fine Arts. There are obviously a few earlier works scattered in the public domain from this period but her professional desires came to halt with marriage, a daughter and the continued care of her mother. The man she married was a career officer in the Navy, Commander Archibald Nester Offley. The transient nature of their lifestyle stationed them from port to port in the USA. A formal studio gone, clients inconstant and the time needed now divided. The story could have ended here but thankfully it only begins. Uncle Archie died before I was born and was frequently talked about with reverence. It is only now in sifting through family belongings, that I find his own talents as a superb illustrator and with an equal passion for writing and outdoor adventure. Archie’s eventual west coast stationing provided them easy access to some of our nation’s greatest natural treasures. Mary Agnes’ professional desires may have been dashed but she met a man who shared her interests, nurtured her abilities and it shifted her to painting for pleasure, perhaps less frequently but no less passionately.

Mary Agnes’ life sounds picturesque and privileged, being educated with a supportive family. However, she did face the tragedy of loss in her earlier years. It had to have shaped her somehow but in her paintings I only see the positive. The death of an older sister just after she was born. The early death of her father when she was 22. The death of her own daughter Mary. Their only child barely reaching the age of 13. Her mother next, having lived with her until the end, then Archie. All this before she was 50. Here too the painting story could have ended, being widowed and alone. Ah, but it didn’t. Enter the younger man.

I won’t go into too much further detail. It is not my intent to give you a full biography in this writing, just an introduction. What eventually was produced from this love of art, transition and men in her life, is an intact body of work produced mostly from her later years. You will find this in the presentation’s DVD. Her paintings were her memories. Perhaps a way to soften the hurt of loved ones lost. A way to escape to happier times. Perhaps as a testament to the love of what she did. She treated them as we would today treat a photo album. To us, it is a snapshot of; a wedding, Disneyland, or a Tuscan vacation. A brief joyful sanctuary from a run-a-day world. To her, these 150+ paintings that hung on her own walls were the same; a trip to Santa Fe, Mt Rainer, Yosemite or the Tetons. They covered every inch of her wall space. They were her fond memories and as such, not dispersed or distributed, just shared. To have given away one would have deprived the recollection of something special in her life. They now become her legacy.

There is a great deal of accompanying material well documenting Mary Agnes’ paintings and the travels to her favorite subject matter, our national parks. Included in this presentation are some sample photos of; travel logs, maps, photographs and memorabilia. There are boxes of them. I thank Uncle Archie for that part. His handwritten travel logs and illustrations are exquisite. Both their photographic endeavors too numerous. All paintings are labeled as to “where and when” in Aunt Agnes’ own hand. And yes, I now have those pine cones as big their cat, and as shown in the photos perched on the front bumper of their 1920 Buick while painting and camping.

Mary Agnes’ story is about a love affair. I cannot find a better way to show it, than through her works of art.

Note: The author is the grand-nephew of the artist.