Julia Wyszynski Lemos came from a home where family was important. Her father was a lithographer and her mother was a housewife and mother. Little is known about her brother beyond his enlistment in the Navy and him deserting the Navy two years later. Nothing is known about any artistic schooling for Julia. Therefore, it is assumed that her father taught her at home. Undoubtedly due in part to the slowness of changing perceptions about women’s artistic abilities, Julia’s skill as an artist is only documented once after the Chicago Fire of 1871.

However, the era Julia grew up in marked the beginnings of acknowledgment for women in professional fields such as medicine, law, and art. As much as Julia’s contribution to the art world is very limited, her courageous fight to keep her family safe paved the way for her children and grand-child to become documented artists.

Julia Lemos was raised in New York by her parents, Baron Eustace and Johanah Wyszynski, and she had one brother, Eustace. According to U.S. Census records, Baron Eustace was born in Poland between 1813 and 1815. He came to New York in 1834 and made a plea for naturalization in 1852. Presumably, the whole family lived at 134 W. 13th street in Ward 9, District 1 in New York, New York in 1852. Her mother, Johanah, was born in New York about 1820 to Peter B. Van Buren and Elizabeth Foster Ritchie. It appears that Julia lived in New York approximately until 1863. Around this time, she moved to Kentucky and then to Illinois around 1871. It is unclear whether her parents and brother followed her to Kentucky, but it is known through census records that her parents followed her to Illinois.

In 1860, Julia married Nicholas Lemos when she was 16 years old. The couple lived in Brooklyn Ward 9, District 1 in Kings, New York until approximately 1863. They had five children together, two boys and three girls. William, their eldest son, was born in New York on August 8, 1862.

While her next three children, Josephine, Nicholas Jr., and Julia (the 2nd), were born in Kentucky. Josephine was born in 1864, Nicholas Jr. was born in 1866, and Julia (the 2nd) was born in 1868. Their youngest child, Adline, was born in Illinois in 1870. In Kentucky, Nicholas was a wholesale dealer and Julia worked at home raising their children and keeping house. According to a tax document, Julia and her family lived in Louisville, Kentucky in 1865. Sometime between 1870 and 1871, Julia moved to Chicago, IL with her parents and four children. It is unknown if her husband was alive during this move, but as of the Chicago Fire on October 8, 1871, she claimed to be a widow. 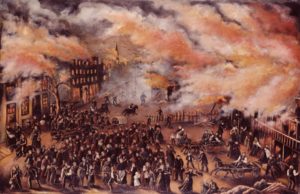 Art accomplishments
Julia’s artistic accomplishments are unknown prior to 1871. Therefore, it is assumed that she was mainly a housewife and mother who might have painted in her own spare time. However, her experience during the Chicago Fire brought more public notice of her talent as an artist. Even though it was years after the fire, in 1912 she created a beautiful painting called “Memories of the Chicago Fire.” This piece is held at the Chicago Historical Society in Chicago, IL along with a written account of her flight to safety with her family called “My experiences of the Fire of 1871 in Chicago.”

Despite her not being listed as an artist in any documents, in Julia’s bibliography after the fire, she states that she was employed as a lithographer at Shober & Carqueville Lithographing Company (Amon Carter Museum). She was employed there prior to the fire and again after returning from her flight to New York. From 1882 to 1895, she is listed in the business directories as a self-claimed artist. The locations of her places of employment vary throughout this time period. For example, at times it appears that she worked from home as an artist while other listings provide work addresses different from her place of living.

Life in Chicago, IL
Julia moved on an average every four years. In 1871, she lived at 555 Wells Street in Chicago, IL, which was probably her first place of residency after she moved from Kentucky. At this location, she was living with her parents and five children until her mother grew ill and Julia was unable to care for everyone in the family. Therefore, Julia made a difficult decision to place four of her older children in Half-Orphan Asylum at 175 Burling Street of the 21st Ward, North Town in Chicago. She kept her youngest child Adline at home because she was “not a year old” (Chicago Historical Society, 2008). However, within two weeks, Julia went to the asylum to bring all of her children home. Unfortunately, she was told she had to wait until the beginning of the forthcoming week. So, Julia went home that Friday night, paid her rent for another month, and patiently waited for Monday to arrive. As she closed the shutters to their cottage, she noticed a strong wind blowing through the town. At that time, she did not realize that a fire was quickly approaching her home from the West Side of Chicago. Early the next morning, she heard noises outside of people on the street who were fleeing to the North Side from the West Side of Chicago. Julia quickly woke her parents and without much thought ran to the asylum to get her children. With some pleading, Julia was able to take her children home. They packed up two chests of belongings, some food, a mattress, and a gun. With the children in tow plus Baron’s hunting dog, the whole family headed north. Each time the family thought they were safe from the blazing fire they had to move further north. At one point, Julia’s eldest son asked if it was the “Last Day” (Murphy, 1995, p. 93). From a prairie, to a shed on a farm, and to a church, the family finally reached safety from the unmerciful fire and the welcomed rain. Unfortunately, Julia and her family had to leave their two chests behind; therefore, they believed they would lose all their possessions in the fire that seemed to chase them across the land. However, with the generosity of a policeman who buried their two chests, their valuables were safely recovered. With some help from the government that was giving free railroad passes, Julia’s family finished their escape to New York. Not long after their arrival at the New York train station, Julia was approached by the “richest man in New York,” who was helping the refugees of the Chicago Fire (Chicago Historical Society, 2008). The man gave Julia ten dollars, which was the only money she possessed at that point. Cornelius Vanderbilt was most likely the generous donor, since he had ties to the railroad; however, this is not confirmed.

After arriving in New York, Julia’s family stayed with some relatives for a couple of weeks until they found a place of their own to rent. Just a few days after her flee to New York, Julia found a job as a lithographer, which allowed her to work from home. After living in New York for eighteen months, Julia and her whole family returned to Chicago. She got her old job back as a lithographer at Carqueville & Shober Lithograph establishment (Chicago Historical Society, 2008), which was renamed “The Chicago Lithographing Company” after the original structure burned down during the fire and re-opened under the new name (Amon Carter Museum, 2008). Unfortunately, there is little information available about how long she worked at this shop and what her artistic contributions were.

Artistic children and grandchild
Two of Julia’s children became successful artists. Her eldest son, William, was a naïve still life, landscape, and mural painter. As a young boy in New York, he would wander the streets, earning money for the family, by “painting on request.” At age 26, William moved to San Francisco, California. He opened an art studio and kept it running until he moved to Santa Cruz with his wife, Mabel, in 1896. During this period, he worked as a fresco artist painting “murals for many local businessmen.” For forty years, William worked as a concessionaire at the Beach Casino in Santa Cruz, where he painted “redwoods, still lifes, forest fires, beach scenes, and marines” on his concession platform. At the age of 80, William’s vision diminished, and he lived his last year or so fishing with a friend. He passed away on August 8, 1942 at age 81. Known works by William are: Mt. Shasta; Portrait of a Native American Woman; Crater Lake; Mt. Hood; Hood River; Cypress Point; Monterey; Sailing by moonlight of the Coast at Night; Redwoods; and Mt. Hottman and Lake Tynihh (Askart, 2008). Several may be seen at the AskArt.com website.

Julia’s oldest daughter and second oldest child, Josephine, was also a documented artist. Josephine enjoyed painting landscapes and marine images with oil. She belonged to many associations, such as the Chicago Society of Artists and the National Association of Women Artists. She attended three art schools, including the School of the Art Institute of Chicago (John Vanderpool was her teacher), Art Students League of New York (Charles Hawthorne was her teacher), and Cape Cod School of Art. She had five exhibits located at the American Watercolor Society, Art Institute of Chicago, National Association of Women Artists, Pennsylvania Academy of the Fine Arts, and Society of Independent Artists. She was also a member of the Society of Independent Artists. In 1930, Josephine “was considered one of the substantial painters of Chicago” (Askart, 2008). She married Frank Reichmann and had 3 children. In 1938, she died of undocumented causes. One of Josephine’s best known works is the Chicago World Exposition Building (date unknown), which can be seen at the AskArt.com website.

Julia’s grandchild, Josephine Dorothea Reichmann, was also a documented artist. She was born to Frank Joseph Reichmann and Josephine Lemos on April 2, 1885 in Chicago, IL. Her father was a transportation official and her mother was an artist. Increase married Philip Increase Robinson and had two children together, Philip and Ester. After her husband died, Josephine took her father-in-law’s name, Increase Robinson, because “because she didn’t want to be typecast as a female artist” (Lorance, 2006). Increase belonged to Chicago Art Club and the Chicago Society of Arts. During the mid-1930’s, Increase became the Illinois State Director of the Federal Art Project. Sometime in the late 1930’s or early 1940’s Increase married E. Kendall Davis. In 1946, she moved with her husband to Sacramento, California, where she opened an art gallery. One of her better-known works is Corpus Christi, which was created in 1943, which can be seen at the AskArt.com website. She died on October 16, 1981 in Sacramento, California. In 1984, the Increase Robinson Award was created by her surviving family and friends at California State  University in Sacramento (Askart.com, 2008).

Julia Lemos: Conclusion
Julia Lemos’ artistic ability has mostly been left unnoticed. However, her accomplishments have gone beyond the art world and focused on family. When she moved, she always took her family with her. This movement with all of her family demonstrates the importance she placed on caring for her parents and children. As she was only known as a self-claimed lithographer, her abilities to obtain a job within three days of arriving in New York and to re-gain her position at the lithographic shop in Illinois shows she was a talented artist. Up until the census of 1920, Julia claimed to be an artist who lived as a lodger in Chicago, IL. Her commitment to her artistic abilities and her love for her family during trying times shows the characteristics of a strong and courageous woman, not “weak and delicate” as 19th century society often described females to be (Murphy, p. 91).